Hey, this photo is under © copyright

Early in October of 2016 I took a road trip to Northern Wisconsin to photograph waterfalls. I was surprised at the number of waterfalls found within Wisconsin and Michigan. The photographs below represent just a handful of what the area has to offer.

Heading out at noon on Wednesday, October 5th, I drove to Hudson, WI. Just north of Hudson is Willow River State Park and the Willow River Falls. The falls were very photogenic with lots of areas where I could frame in tight. Late-afternoon light reflecting off the rock wall gave a golden glow to the tighter shots. With fast running water, I didn’t need really long exposure times.  Most of these shots were in the 1/2 second to 1 1/2 second range. I spent the night just north of the park and headed out before sunrise the next morning for my next location. 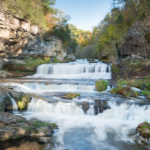 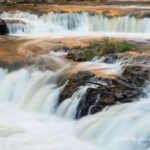 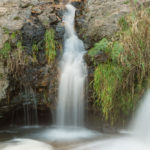 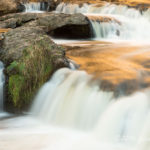 Located in Douglas County, Pattison State Park is just south of Superior, WI and is home to the Big and Little Manitou Falls. Big Manitou is big and difficult to get close to. Little Manitou has easier access and allows for better angles. Lots of sun made for some contrasty pictures, but I tried to frame as little sky as possible. I spent a few hours in the park then headed east on Rt 2 for Saxon, WI to shoot Saxon Falls. 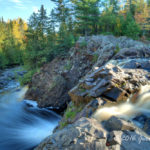 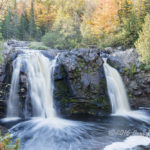 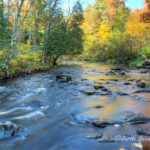 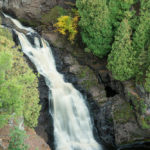 There was a distraction along Route 2 on my way to Saxon. I saw signs for Amnicon State Park and remembered that there was interesting water there as well. So I detoured for a couple of hours. The park is named for the Amnicon River that runs through the area. It’s not a big park, but is has lots of shade, water that you can get close to, and two or three photo worthy falls. I say two or three because I didn’t get to the Lower Falls. After finding Snake Pit Falls and the Upper Falls, I needed to hit the road again to get back on schedule. 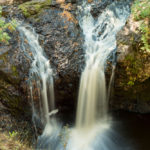 Saxon Falls is located on the Montreal River. This river is part of the far western border between the Upper Peninsula of Michigan and Wisconsin. It was more of a hike than I thought it would be, down a short road, over a catwalk that takes you across the river and then down some stairs to a not-very-well marked trail. But with all the rain this year the water was flowing well and the pictures were worth the hike. There is an upper falls and a lower falls and both were quite impressive during my visit. With few photo-worthy vantage points, a photographer has to take what they can find. While I was hiking to Saxon Falls, I bumped into two other hikers who were also checking out the waterfalls in the area. They let me know about the “Black River” series of waterfalls just across the border in Michigan. More about that in a bit. 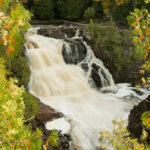 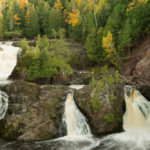 The morning of October 7th found me in Copper Falls State Park in Mellen, WI which is home to Copper Falls, Brownstone Falls and the Tyler Cascades. Again, with all the rain we’ve had in the Midwest lately, the falls were in full force. It is a beautiful park with clear trail markings. The meandering trail takes you all through the park and affords multiple angles from which to shoot Copper Falls and the Tyler Cascades. There is also an observation tower that I estimate to be about 60 feet tall. Unfortunately, the trees immediately around the tower have grown taller and block a substantial amount of the view. But it was still a great experience. 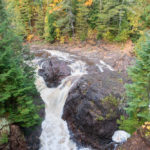 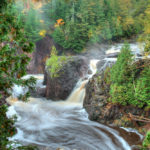 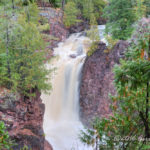 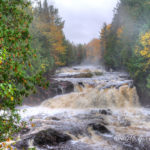 Finally, I found my way to Bessemer, MI and Black River Road which runs north/south between Bessemer and Lake Superior and along the Black River. Just a couple of miles north of Bessemer you will enter the Ottawa National Forest. Another 10 miles up the road you will start seeing the signs for the five waterfalls that populate the last 2 miles of the river before Lake Superior. The first is Conglomerate Falls which is probably the least impressive of the five and the most difficult to photograph from the side of the river I was on. The picture I have here is of the down-river view after the falls. I think this was a more dramatic view. Next up is Potawatomi Falls. This is the easiest access of the five waterfalls on this stretch of the river and the Forest Service did a great job of building trails/stairways to access all of these waterfalls. After Potawatomi Falls comes Gorge Falls. It is the smallest of the waterfalls, but it has character.  Sandstone Falls is fourth waterfall on Black River Road. It is the most sprawling and you can get right up close and personal. Just don’t slip on the moss covered rocks like I did. The most photogenic of the falls is the last one, Rainbow Falls. I can’t say for sure how it got its name but I suspect it’s because of the rainbow effects you see in the spray that this waterfall creates, as I had to wipe my lens multiple times while shooting this waterfall.

I could spend the next three years during summer and early fall traveling around the upper Midwest photographing waterfalls and still not get them all. But I sure would have fun trying! 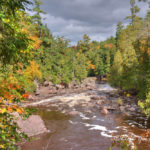 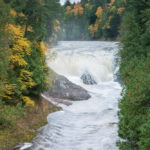 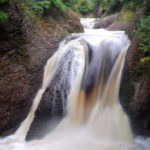 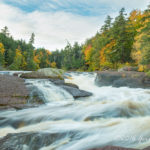 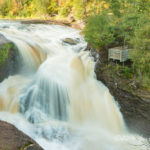